He’s Voice is Incredible , Within his deep songs you can see what’s he’s thinkin’ and how he sees life as they are , a realistic person that he is .

His music is a combination of Gospel Within’ a Soul\R&b tip , a lil’ bit of Jazz , a talented brotha  which his songs still relevant for any mood you’re into .

Here’s the story of one of my favorite artists that his music is very uplifted .

In his career , He Worked with artists Such as Robert Flack , Curtis Mayfield & Stevie Wonder . 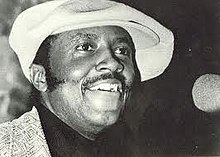 Courtesy & More Information about his career & his death :Donny Hathaway

Donny Edward Hathaway (October 1, 1945 – January 13, 1979) was an American jazz, blues, soul and gospel singer, songwriter, arranger and pianist. Hathaway signed with Atlantic Records in 1969 and with his first single for the Atco label, “The Ghetto“, in early 1970, Rolling Stone magazine “marked him as a major new force in soul music.” His enduring songs include “The Ghetto”, “This Christmas“, “Someday We’ll All Be Free“, “Little Ghetto Boy”, “I Love You More Than You’ll Ever Know”, signature versions of “A Song for You” and “For All We Know“, and “Where Is the Love” and “The Closer I Get to You“, two of many collaborations with Roberta Flack. “Where Is the Love” won the Grammy Award for Best Pop Performance by a Duo or Group with Vocals in 1973. At the height of his career Hathaway was diagnosed with paranoid schizophrenia and was known to not take his prescribed medication regularly enough to properly control his symptoms . On January 13, 1979, Hathaway’s body was found outside the luxury hotel Essex House in New York City; his death was ruled a suicide.

Hathaway met his wife, Eulaulah, at Howard University and they married in 1967. They had two daughters, Eulaulah Donyll (Lalah) and Kenya. Lalah Hathaway is still enjoying  a successful solo career, while Kenya is a session singer and one of the three backing vocalists on the hit TV program American Idol. Both daughters are graduates of the Berklee College of Music.