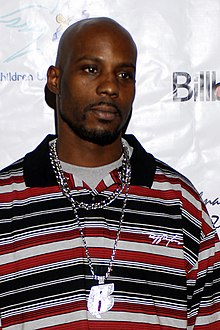 Born as Earl Simmons ,  known by his stage name DMX (“Dark Man X”), was an American rapper, songwriter, and actor. He began rapping in the early 1990s and released his debut album It’s Dark and Hell Is Hot in 1998, to both critical acclaim and commercial success, selling 251,000 copies within its first week of release.

released his best-selling album, … And Then There Was X, in 1999, which included the hit single “Party Up (Up in Here)“. His 2003 singles “Where the Hood At?” and “X Gon’ Give It to Ya” were also commercially successful. He was the first artist to debut an album at No. 1 five times in a row on the Billboard 200 charts. Overall, DMX has sold over 74 million records worldwide.

Featured in films such as Belly, Romeo Must Die, Exit Wounds, Cradle 2 the Grave, and Last Hour. In 2006, he starred in the reality television series DMX: Soul of a Man, which was primarily aired on the BET cable television network. In 2003, he published a book of his memoirs entitled, E.A.R.L.: The Autobiography of DMX .

Had a Feuds with Ja Rule that ended in 2009 and although it fizzled out over the years, continued on when DMX said in an Instagram video that he wanted to rap battle Jay-Z on Verzuz.

On the morning of April 9, 2021, Simmons lost functionality in multiple essential organs, reportedly his liver, kidneys and lungs, and was pronounced dead shortly after, aged 50.