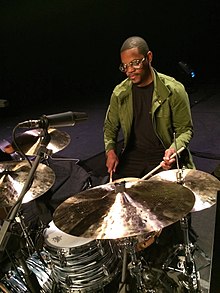 Riggins was born in Detroit, Michigan, son of keyboardist Emmanuel Riggins. As a child, he would often watch his father perform with Grant Green, Marcus Belgrave and others. He joined the Kennedy Elementary school band in the sixth grade as a trumpeter, studying with Belgrave, where he played for two years in addition to drums before switching to drums full-time in the eighth grade.

Riggins was a DJ, producing hip-hop and performing in three different school bands at Southfield High School before leaving school in the eleventh grade. He joined Betty Carter‘s Jazz Ahead band soon after at age 17 and moved to New York in 1994, later joining the Mulgrew Miller trio. He also performed in bands with Steven Scott and Benny Green before joining Roy Hargrove’s band in the middle of 1995.

After three years with Hargrove, Riggins joined the trip of famed bassist Ray Brown. After leaving Brown’s band, he began producing hip-hop extensively and serving as the bandleader for rapper Common’s band, A Black Girl Named Becky. Riggins had met Common in 1996, and began spending time with the rapper during visits with notable hip-hop producers.

Riggins also met J Dilla, a fellow Detroit native, in 1996. The two were later reintroduced through Common and developed a close friendship through the end of Dilla’s life. Riggins frequently cited Dilla as a primary influence and being personally responsible for helping him overcome multiple creative ruts throughout his career. During the course of their friendship, Riggins produced and appeared on multiple J Dilla albums including Welcome 2 Detroit and The Shining. He credits Dilla for purchasing the first production he ever sold, for “The Clapper” on Welcome 2 Detroit.

Riggins released his debut full-length album, the instrumental double-LP Alone Together on Stones Throw Records on October 23, 2012. Prior to the full album release, Stones Throw released the two halves of the album separately on vinyl as well as digitally exclusively through their website. Alone was released on July 30 and Together followed on October 2. He spent much of 2016 at work on Common’s much-heralded Black America Again album, which featured Stevie Wonder on the title song and included a performance at the White House as part of NPR’s “Tiny Desk Concerts” series. On February 24, 2017 Riggins released his second album on Stones Throw, Headnod Suite.

Along with Common and Robert Glasper, Riggins received the award for Outstanding Original Music & Lyrics at the 69th Primetime Creative Arts Emmy Awards for the song “Letter to the Free” which appeared in Ava DuVernay’s Netflix documentary “13th”.