As we proceed with The Native Tongues movement , i wanna focus on two of my favorite Hip-Hop groups that made this movement to what it is today .

De La Soul is one of my favorite hip hop trio that formed in 1987 on Long Island, New York. They’re best known for their eclectic sampling, quirky lyrics, and their contributions to the evolution of the jazz rap and alternative hip hop sub-genres. The members  of the group are Posdnuos (Plug 1)  Dave (Plug 2)  and Maseo as the DJ of the group . The three formed the group  back in high school and caught the attention of  a young producer  and manager Prince Paul with a demo tape of the song “Plug Tunin'”. With its playful wordplay, innovative sampling, and witty skits, the band’s debut album, 3 Feet High and Rising in 1987,  it has been called “a hip hop masterpiece.”

They were influential in the early stages of rapper/actor Mos Def’s career, and are a core part of the Spitkicker collective. They are the second longest standing Native Tongues Posse group, after the Jungle Brothers. In 2006, the group won a Grammy for their collaboration with Gorillaz on the single “Feel Good Inc.”

In early 2015, they announced plans to release a Kickstarter-funded upcoming 9th studio album And the Anonymous Nobody In September 2015 , it was released on August 26, 2016.

The album tracks are said to be the result of multiple improvised jam sessions. The album also features guest appearances from artists such as Damon Albarn, Little Dragon, David Byrne and 2 Chainz.

Here’s Some of their tracks and albums which are my favorite as well :

De La Soul – Me Myself And I

There’s another group i wanna focus on that thier music inpired me and changed my life .

A Tribe Called Quest was  formed in 1985 and originally composed of MC and main producer Q-Tip (The Abstract) , Phife Dawg, DJ and co-producer Ali Shaheed Muhammad and Jarobi White, who left the group in 1991 after the release of their debut album

People’s Instinctive Travels and the Paths of Rhythm” 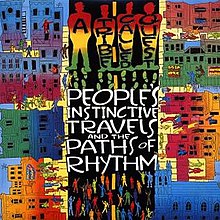 . Jarobi White continued to contribute to the band sporadically before rejoining for their 2006 reunion. Along with De La Soul, the group was a central part of the Native Tongues, and enjoyed the most commercial success out of all the groups to emerge from that collective. The group released six albums between 1990 and 2016. The band broke up in 1998 after releasing their fifth album. In 2006, the group reunited and toured the United States. In 2016, they released their sixth and final album, which was still incomplete when Phife Dawg died suddenly  from diabetes in March 2016, and was completed by the other members Consequence & Busta Rhymes after his death.

The group is regarded as a pioneer of alternative hip-hop music, having helped to pave the way for many innovative artists. John Bush of AllMusic called them “the most intelligent, artistic rap group during the 1990’s.

The Source gave the group’s debut album a rating of five ‘mics,’ the first time the magazine gave out this rating. In 2005, A Tribe Called Quest received a Special Achievement Award at the Billboard R&B Hip-Hop Awards in Atlanta.In 2007, the group was formally honored at the 4th VH1 Hip-Hop Honors.

Here’s some of their hits :

A Tribe Called Quest – It’s Yours

A Tribe Called Quest – Can I Kick It?

A Tribe Called Quest – I Left My Wallet In El Segundo

A Tribe Called Quest – Jazz (We’ve Got) Buggin’ Out