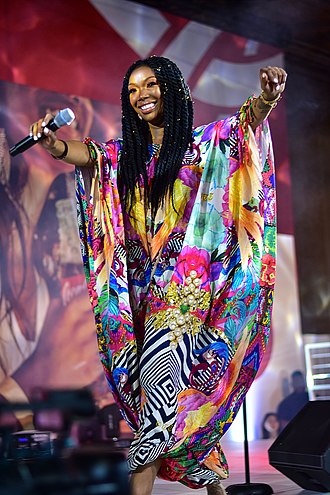 She’s an amazing singer, songwriter, record producer, and actress. Born into a musical family in McComb, Mississippi and raised in Carson, California, she began her career as a child and performed as a backing vocalist for teen groups. In 1993, Norwood signed with Atlantic Records. The following year, she released her self-titled debut album, which was certified quadruple Platinum in the U.S., selling six million copies worldwide. Norwood starred in the UPN sitcom Moesha as the title character, which lasted six seasons and resulted in numerous other roles. She resumed her music career in 1998 with the wildly successful duet with fellow R&B contemporary Monica, “The Boy Is Mine“, which went on to become the best selling female duet of all time, and one of the longest running number one singles in history. Her second album, Never Say Never, sold 16 million copies worldwide, featured two number one singles, and earned Norwood her first Grammy Award. This launched her into international stardom, with films, endorsements, sold out concert tours, and her own line of Barbie dolls.

She worked with artists like : Kanye West , Chance The Rapper , Common , August Greene , Robert Glasper among many others .

Brandy Rayana Norwood  was born in February 11, 1979 . in McComb, Mississippi, the daughter of Willie Norwood, a gospel singer and choir director, and his wife, Sonja Norwood (née Bates), a district manager for H&R Block.Brandy is the older sister of entertainer Ray J, as well as a cousin of rapper Snoop Dogg and WWE wrestler Sasha Banks Raised in a Christian home, Norwood started singing through her father’s work as part of the local church choir, performing her first gospel solo at the age of two.

In 1983, her parents relocated to Los Angeles, California, where Norwood was schooled at the Hollywood High Performing Arts Center. Norwood’s interest in music and performing increased after becoming a fan of singer Whitney Houston at the age of seven,but at school, she experienced trouble with persuading teachers to send her on auditions as she found no support among the staff. Norwood began entering talent shows by the time she was eleven, and, as part of a youth singing group, performed at several public functions.

In 1990, her talent led to a contract with Teaspoon Productions, headed by Chris Stokes and Earl Harris, who gave her work as a backing vocalist for their R&B boy band Immature, and arranged the production of a demo tape.. In 1993, amid ongoing negotiations with East West Records, Norwood’s parents organized a recording contract with the Atlantic Recording Corporation after auditioning for the company’s director of A&R Darryl Williams To manage her daughter, Norwood’s mother soon resigned from her job,while Norwood herself dropped out of Hollywood High School later, and was tutored privately from tenth grade on.During the early production stages of her debut album, Norwood was selected for a role in the short-lived ABC sitcom Thea, portraying the daughter of a single mother played by comedian Thea Vidale. Initially broadcast to high ratings, the series’ viewership dwindled and ended up running for only one season, but earned her a Young Artists Award nomination for Outstanding Youth Ensemble alongside her co-stars. Norwood recalled that she appreciated the cancellation of the show as she was unenthusiastic about acting at the time, and the taping caused scheduling conflicts with the recording of her album. She stated, “I felt bad for everybody else but me. It was a good thing, because I could do what I had to do, because I wanted to sing.”