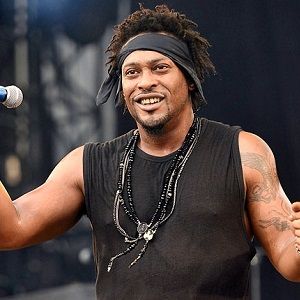 He’s a True R&B Singer , With a voice that reminds me and hopefully  for some of y’all The Voice Of Prince with a lil’ jazz , gospel and soul vibes .

Preformed for so many years with his own Band The Soultronics.

Here’s The Story Of The Black Messiah , Michael Eugene Archer aka D’Angelo .

Born at  February 11, 1974 , He’s a  songwriter, multi-instrumentalist and record producer. D’Angelo is associated with the neo soul movement, along with artists like Erykah Badu, Lauryn Hill, Maxwell, and collaborator Angie Stone.

Born in Richmond, Virginia, He’s The Son of a Pentecostal minister, D’Angelo taught himself piano as a child. At eighteen, he won the amateur talent competition at Harlem’s Apollo Theater three weeks in a row. After a brief affiliation with hip-hop group I.D.U., his first major success came in 1994 as the co-writer and co-producer of the song “U Will Know”.

In 1995 , He released his debut solo album, Brown Sugar , received positive reviews and sold over two million copies. His next album, Voodoo (2000), debuted at number one on the US Billboard 200. Its lead single Untitled (How Does It Feel), entered the R&B charts and won a Grammy for Best Male R&B Vocal; likewise, Voodoo won Best R&B Album. D’Angelo was hailed as the next Marvin Gaye by GQ in 2014.

Following the release of the music video for “Untitled (How Does It Feel)”, he became more than uncomfortable with his growing status as a sex symbol. This was followed by numerous personal struggles including alcoholism, and a fourteen-year long musical hiatus.

In December 2014,  D’Angelo released his third studio album, Black Messiah. The album was met with critical acclaim and fared well on music charts, peaking at number five on the US Billboard 200. He also contributed to the soundtrack for the 2018 video game Red Dead Redemption 2, performing the song “Unshaken” .

He was raised in an entirely Pentecostal family. Archer’s musical talents were discovered very early on. At 3, he was spotted by his 10-year-old brother Luther, playing the house piano. Following the formation of his native-Richmond, Virginia musical group, Michael Archer and Precise, and its success on the Amateur Night competition at Harlem, New York’s Apollo Theater in 1991, the 18-year-old singer-songwriter and multi-instrumentalist dropped out of school and moved to New York City, as an attempt to develop his music career.The group previously enjoyed some notice in Richmond, evenly dividing their repertoire between soul covers and originals, while D’Angelo accumulated compositions of his own and developed his songwriting skills. The group’s turnout on Amateur Night resulted in three consecutive wins and cash prize, after which, upon returning home to Richmond, D’Angelo was inspired to produce an album and began composing material,after a brief tenure as a member of the hip hop group I.D.U. (Intelligent, Deadly but Unique).

What REALLY Happened to D’Angelo?

In the 1990’s, he dated soul singer Angie Stone and helped produce her debut album Black Diamond in 1999. They have a son, named Michael D’Angelo Archer II, born in 1998.

Variations of Voodoo: A Tribute to D’Angelo (Prod. Amerigo Gazaway)