YG Is Tired Of The Fake Nipsey Hussle Love: “They Liable To Get Slapped”
Volume 0%

I mean, if you’re not willing to sing along to “FDT,” why go to a YG show in the first place?

YG‘s disdain for Donald Trump has been well-documented in the past. The rapper teamed up with the late Nipsey Hussle for one of the biggest protest songs of the Trump era, aptly titled, “FDT” for F*ck Donald Trump. That being said, if you’re going to go to a YG show, you should probably avoid showing your support for Trump, if that’s who you’re rockin’ with.

Unfortunately, a fan had to learn that the hard way during YG’s set at Mala Luna. The rapper was on stage before calling out a young man from the crowd who apparently didn’t want to yell “F*ck Donald Trump.” Not sure why anyone who’s on the fence about Trump would go to a YG show in the first place but this particular fan was made an example of after YG pulled him out of the crowd.

“Aye listen. I spotted you out in the crowd, I asked you if you fucked with Donald Trump. You said you don’t know. So, since you don’t know, I need you to make up your mind tonight,” YG told the fan. “I need you to state your name ’cause I know your momma, your daddy, you grandmother, your grandfather is watching. I want you to state your name and yell out, ‘Fuck Donald Trump.'”

The individual did not fold in his position, despite being met with boos, and YG inevitably directed his security, “Get his ass out of here. Get his ass off stage.”

Peep the clip below. 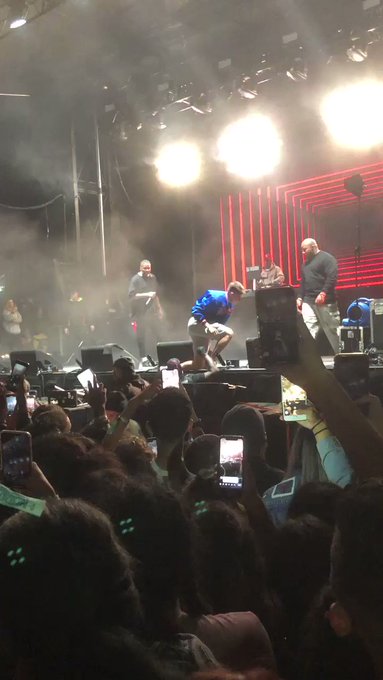 517 people are talking about this

← Chance The Rapper Performs “Zanies and Fools” and “Handsome” On SNL
B. Simone Takes Her DaBaby Obsession To Next Level With Halloween Costume →