OVO Festival is making a comeback this year.

Drake was front and center during today’s Raptors parade that took over the city streets of Toronto in celebration of the team’s historical NBA Championship. Drake, the team and all of the league’s affiliates cruised through the streets on top of a double-decker bus, before coming together at Nathan Phillip’s Square where speeches were held with the winning team.

Once Drake got on the mic, he gave his city more than they could have asked for when he announced the revival of his beloved OVO Festival. The music festival is lead by a number of surprise musical guests and started in 2010 and ended in 2017. “I hope all these guys will join me this year ’cause we bringing OVO Fest back so I hope we can go crazy!” he announced to the crowd, pointing to the Raptors roster. 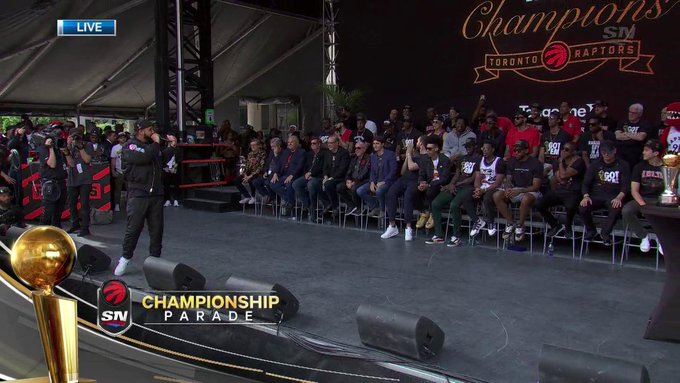 The parade was a historical moment for the city and even saw Drake’s new OVO airplane, dubbed Air Drake, circling the sky and coasting over the CN Tower.

Around two million people were downtown for the parade, taking city pride to a whole new level. “I’m living a dream right now,” Serge Ibaka told CBC, while Pascal Siakam added: “This is the best thing I’ve ever seen in my whole life.”